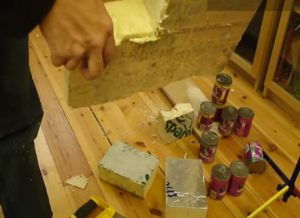 Why Did We Get Wet Insulation?

The insulation was taken from a flat roof on a large block of flats in Portsmouth, Waterlooville. The vapour barrier was installed in the wrong place. Water had found its way into the roof through various ways.

There were several leaks, but also, on further inspection, the flu’s or ventilation pipes fitted into the shower/ bathrooms within the building, were pumping the damp extracted air into the roof space on top of the vapour barrier and into the insulation. As the sun heated the roof up, the moisture in the roof was being vaporised, rising, and absorbing into the insulation board.

Then as the sun went away, and the roof cooled, the moisture would drip down onto the bottom of the wet insulation board, and onto more moisture which would have collected from all the shower ventilation extraction points. Slowly a thick build up of moisture and saturated insulation board had begun to dominate the underside of the flat roof. Gradually pin holes, joins, fixings, light units, and all types of bridges points which allowed air to move through the roof, became ingress points. Water damage began appearing on the ceiling, and several tenants became even more concerned when water began coming out of their embedded lights.

A few concerned occupiers removed lights to have a feel around on the inside of the ceiling and found an abundance of wet insulation board. We were then contacted by a well known insurance company to come and assess the situation. More videos will be provided regarding the wet insulation and the core samples of the wet insulation and roof that were taken during an investigative inspection.

Watch the above video to see how wet the insulation actually got, even after 2 hours being transferred from the job in Portsmouth back to London, Steve only has to squeeze the wet insulation board, and water comes out like a sponge.

Building Response and London Flat Roofing Ltd regularly working in partnership to diagnose and carry out reparation and rebuild work; this mammoth roof in Portsmouth, Waterlooville was over 360 square meters, all of which was affected by saturated/ wet insulation.