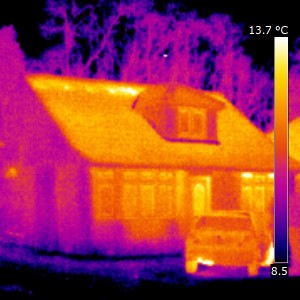 Here we have a converted bungalow in Watford, Carpenders Park. This area has many of the same bungalow types in it which were all built around 1930. Most bungalows in Watford have had so much building and renovation work done now, including loft conversions and extensions, that they are quite different in feature than they were in the 1930’s.

Our Watford clients at this property were complaining that they could feel drafts playing across the room in their newly built loft converstion (only 1 year old). They couldn’t understand why, as they had witnessed their builders ‘pack the ceiling with insulation’. These clients contacted Building Response in order to begin a fault finding project on their little Watford Bungalow; to determine the source of these drafts.

Building Response used Thermal Imaging technology to evaluate the heat loss and the thermal efficiency of the building. The findings were rather interesting.

Internally, the downstairs of the house was fairly energy efficient; the house was warm, the heating was on low and it appeared to be holding the heat well. There were a few minor heat loss problems, some of which can be seen in the above picture. For example, on the right hand side of this property you can see above the windows that heat is escaping through open air vents. The left hand side of the front of the property has a lighter area under the window. This is where the radiator is positioned on the other side, and heat is being transferred through the wall. Using silver reflective radiator padding behind the radiator would help prevent this small detail and contribute to the thermal efficiency of the property; helping maintain a lower energy bill and keep the room warm for longer.

The main problem which was the initial focus of the study however turned out to be an easy one to fault find, but a hard one to determine exactly what the cause of the problem might be. Heat loss can be seen here level with the ridge board at the peak of the pitched roof. Insulation had slipped down on this inside of this roof, between the plasterboard and rafters, and the 50mm air gap and sarking felt. This could be because it was not fixed to the Watford property properly in the first place, or that vibration over time has caused it to slip, or that there is wind flow getting in under the ridge tiles or between the pitched roof tiles, and moving the insulation away from its designated position.

The solution to this problem will require some disruption. It would cost the clients a lot less to address the sagging, missing, or slipped insulation and heat loss issue from the inside, than from the out. Internally, the ceiling could be taken down and then the insulation replaced and fixed correctly (preferably using Kingspan or Celotex solid insulation to the correct specification, which would help prevent it slipping again or being blown away). The ceiling would then need to be re-plaster boarded, re-plastered, and redecorated. This would probably be the less expensive method as the scaffolding and the removal of the roof from the outside would be incredibly expensive.

Thermal Imaging technology can be seen in this example, once again, excelling in the field of building diagnostics. Our qualified Thermal Imaging specialist provided the client with a full covering letter including recommendations for each point picked up during the survey, and utilising photographic evidence in the form of Thermal Images and explanatory documentation to support each finding.

The cost of the Thermal Imaging survey was £245.00 plus VAT, and the client subsequently used Building Response to conduct all aspects of the work required to solve the heat loss problem. The Watford property now no longer has any drafts coming through upstairs, and the decorative value and finish of the ceiling was made to like identical to how it was prior to the beginning of the works.